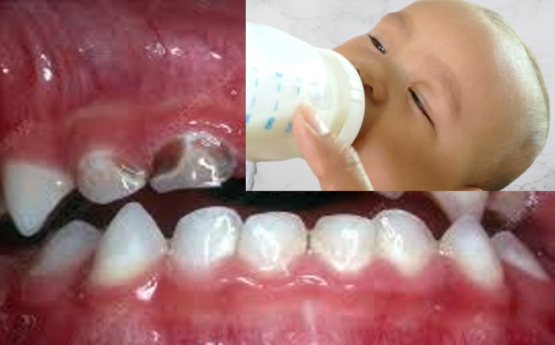 FORMATION OF PRIMARY AND PERMANENT TEETH.

We all have heard about tooth decay.

Do you know what it really means?

What are the causes and complications of it?

Do you know “feeding bottles are the foremost reason for cavity in children’s”?

Human teeth have an outer surface called Enamel. It is made up of calcium and other minerals in the form of crystals. These crystals have the capacity to remineralize or demineralize.

When there are food particles left in the oral cavity, the bacteria in the mouth act on it and produce acids. In the same way, when there is poor oral hygiene there forms a soft detachable material on the surface of the teeth called Plaque.

When the cavity is deep-reaching the innermost tissue of teeth is called the pulp, there will be symptoms. When there are mild symptoms like pain or sensitivity only while taking cold or hot foods, it means the pulpal damage is in a reversible stage.

Here the pain is intermittent. When there is spontaneous pain, this means the pulpal damage is in the irreversible stage.

Carbohydrate-rich, non-fiber foods are the main cause of dental caries. The surface of the tooth, nature of the food, time, and the microorganisms all decide the caries formation.

Continuous bottle feeding in an age group of 2 to 5 years causes baby bottle caries. When sweetened liquids or milk is fed to a child and the child falls asleep, the liquid may be stagnant around the teeth. Bacteria in the mouth thrive on this sugar and form acids that attract the tooth. The condition is additionally related to breastfed infants who have prolonged feeding habits or pacifiers that are frequently dipped in honey, sugar, or syrups. While the infant is sleeping there raise risk of cavities.

How to prevent this?

Never allow children to nod off with a bottle containing milk, juice, or sweetened liquids. As soon as the teeth erupt discontinue baby bottles and teach the child to drink from the cup.

FORMATION OF PRIMARY AND PERMANENT TEETH.

What do you mean by baby teeth?

It is nothing but milk teeth or first teeth, which we see in a baby’s mouth. It is a process in tooth development in which the teeth enter the mouth and become a visible called eruption of teeth. Primary teeth or baby teeth usually start coming in the mouth at an age of six to eight months.

Permanent teeth start appearing in the mouth at about six to seven years. Tooth development is sooner in females than in males. There are twenty baby teeth and thirty-two permanent teeth which we see during a human’s body. Teeth is composed of calcium, phosphorus, and other minerals and are the hardest part of the human body. Teeth mostly consist of calcified tissues called dentin (the second layer of the tooth). The dentin is covered by enamel the hard shiny layer that you brush or eat. The first primary teeth to develop in babies are already formed under the gums prior to birth.

Lower central teeth are the first milk teeth to appear in the baby’s mouth. The appearance of the teeth in babies is associated with pain, redness of the gums, loss of appetite. Considerable variation exists within the presence or absence and severity of the symptoms related to teething.

In children, 20 primary teeth are being replaced by thirty-two permanent teeth, sixteen in each jaw. The first permanent molars ( back teeth) usually develop between ages six and seven years.

Abnormalities in teeth development (timing and sequence) are often caused by genetics and may result in malalignment of teeth. In severe cases such as Down syndrome, the development may be delayed by several years and some teeth may never develop. Sometimes one or more teeth fail to erupt within the mouth. This can happen could also be by obstruction from primary teeth or milk teeth, the bone surrounding the unerupted teeth, or other mechanical factors.