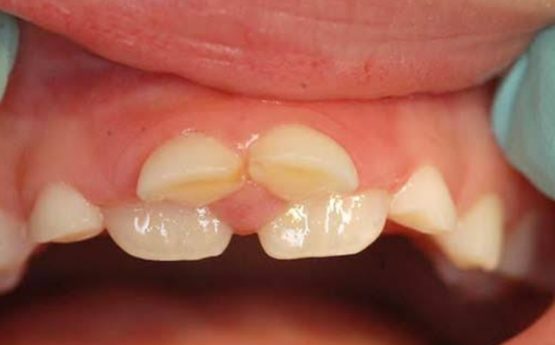 What do you mean by baby teeth it is nothing but milk teeth or first teeth, which you can see in your baby’s mouth. It is a process in tooth development in which the teeth enter the mouth and become a visible called eruption of teeth. Primary teeth or baby teeth usually start coming in at the age of six months while permanent teeth start coming in at about age six to seven. Teeth development is sooner in females than in males. There are twenty baby teeth and thirty-two permanent teeth which we see in a human’s body. Teeth are composed of calcium phosphorus and other minerals. But bone is still not as strong as teeth. The hardest part of the human body. Teeth mostly consist of classified tissues called dentin (second layer of the tooth). The dentin is covered by enamel the hard shiny layer that you brush or eat. The first primary teeth to develop in babies are already formed under the gums prior to birth. Lower central incisors are the first milk teeth to erupt or develop in babies. The eruption or development of teeth in babies is associated with pain, inflammation, disturbed sleep, gum rubbing, bowel upset, loss of appetite, considerable variation exists in the presence or absence and severity of the symptoms associated with teething. In children ten in each of upper and lower jaws, these teeth are replaced by thirty-two permanent teeth, sixteen in each jaw. The first permanent molars ( back teeth) usually develop between ages six and seven years.
Abnormalities in teeth development (timing and sequence) are often caused by genetics and may result in a malocclusion (it is misalignment or incorrect relation between the teeth of the two jaws when they approach each other as jaws close). In severe cases such as Down syndrome, the development may be delayed by several years and some teeth may never develop. Sometimes the failure of the development of teeth happens when single or multiple teeth fail to erupt in the mouth. This can happen due to obstruction from primary teeth or milk teeth, the bone surrounding the unerupted teeth, or other mechanical factors.