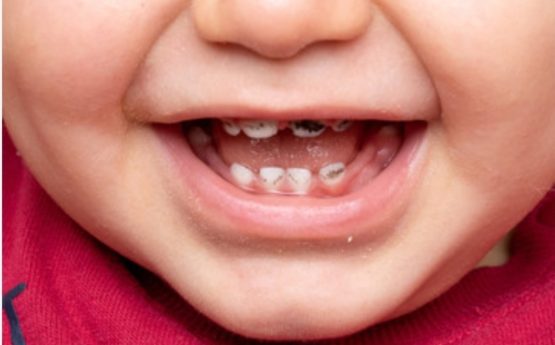 What do you mean by baby teeth it is nothing but milk teeth or first teeth, the one you can see in your baby’s mouth. It is a process in tooth development in which the teeth enter the mouth and become a visible called eruption of teeth. Primary teeth or baby teeth usually start coming in at the age of six months while permanent teeth start coming in at about age six to seven. Teeth development is early in females than in males. There are twenty baby teeth and thirty-two permanent teeth which we see in a human’s body. Teeth are composed of calcium phosphorus and other minerals. But bone is still not as strong as teeth. The rigid part of the human body.

Teeth mostly consist of classified tissues called dentin (second layer of the tooth). The dentin is covered by enamel the hard-shiny layer that you brush or eat. The first primary teeth to develop in babies are already formed under the gums prior to birth. Lower central incisors are the first milk teeth to erupt or develop in babies. The eruption or development of teeth in babies is associated with pain, inflammation, disturbed sleep, gum rubbing, bowel upset, loss of appetite, considerable variation exists in the presence or absence and severity of the symptoms associated with teething. In children ten in each of upper and lower jaws, theses teeth are replaced by thirty-two permanent teeth, sixteen in each jaw. The first permanent molars (back teeth) usually develop between ages six and seven years.
Abnormalities in teeth development (timing and sequence) are often caused by genetics and may result in a malocclusion (it is misalignment or incorrect relation between the teeth of the two jaws when they approach each other as jaws close). In severe cases such as Down syndrome, the development may be delayed by several years and some teeth may never develop. Sometimes the failure of the development of teeth happens when single or multiple teeth fail to erupt in the mouth. This can happen due to obstruction from primary teeth or milk teeth, the bone surrounding the unerupted teeth, or other mechanical factors. 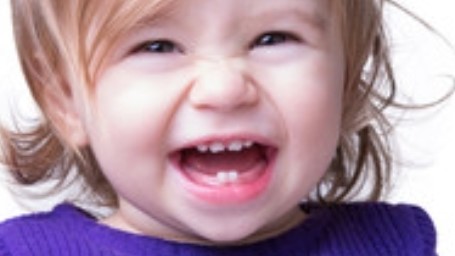 It is often said that a smile sets everything straight. A cute smile of the sweet little toddlers sets it even brighter. But what if these little fellas cannot smile right. There can be many different causes of deterioration of toddler dentition at the very early stage of their lives. Say it nursing bottle caries or rampant caries. As we know humans have two sets of detentions in their whole life. First is primary dentition at a younger age and then the permanent dentition. Defects in primary dentition ultimately lead to deterioration of permanent dentition as well. To avoid such consequences, it is necessary to avoid dental issues at a very early age, which is why here is a complete guide for dental hygiene in toddlers at their different chronological ages.

1. In newborns – in newly borne toddlers although the teeth wouldn’t have erupted yet; however, the bed for future dentition has already started to begin. A light massage on the gum bed and cleaning the gum bed with a gauze piece after feeding by the guardian would do the thing.
2. In the children whose teeth have just started erupting – it is an intermediate phase where the teeth have started erupting and a few teeth are there in the jaw. At this stage, guardians need to be careful about the toddler’s oral hygiene. Gentle cleaning by guardians, especially after feeding would be helpful.
3. Then comes the stage when children have primary dentition in their oral cavity – it is the stage when you introduce your children with toothpaste and toothbrush. Mild toothpaste specially formulated for children are available in the market. Guardians should gradually teach them to use the toothbrush. Brushing should be done in a light circular motion to get rid of food debris and deposits. Do not forget to ask your children to drink plenty of water and avoid eating sticky sugary food.
For more concerns, you can always visit your nearby dentist for case-specific guidance.